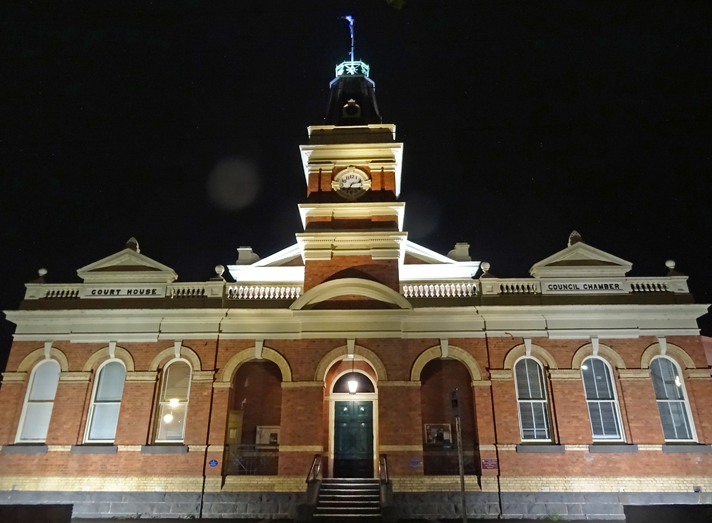 The Town Hall flood lighting was turned on in 2015

The Town Hall complex is divided into three sections with the Hall in the centre. On the west are the Supper Room, Kitchen and Meeting Room which were originally designed as the Borough Offices, Council Chamber and Mayor's Room. All are now available for hire: see Town Hall Hire. On the east, now occupied by the Buninyong and District Historical Society, are the former Court House, Judge's Office and Clerks' Office.

The handsome Victorian Italianate style building was started in 1886. The foundation stone was laid by the dynamic Mayor David Mortimer Davies who was also the local state MP who had successfully lobbied the government for a $1000 grant. The building cost $2,600 and replaced a wooden structure on the same land as well as the original sandstone Court House.

In 1915 the Borough and Shire amalgamated and the Shire moved from its offices in Mr Clear and took over the Borough Offices and Hall.

By 1963, with urban rural population growth and the expansion of council services, the Buninyong Shire Offices could no longer be accommodated in the Town Hall so new offices and a Council Chamber were constructed on the land between the Town Hall and the Fire Station. 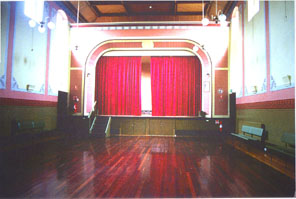 A little over twenty years later, in 1988, the Shire had once again outgrown its premises and at considerable expense ($1,000,000) the existing offices were gutted and extended at the rear of the sixties building. A new entrance and foyer were constructed on the roadway which separated the Town Hall from the Offices. A reception area and toilet block, kitchen and staff rooms on this same road reserve then linked the enlarged offices to the Town Hall via the Court House which became the new Council Chamber. The old Judge's Room became the President's Room and the Clerks Office a committee room.

Over the years the Town Hall complex had deteriorated and during the conversion central heating was installed and the building repaired and redecorated using the original colour scheme and stencilling.

In 1994 the Buninyong Shire was amalgamated with the City of Ballarat and the offices, new toilets, kitchen and staff room were sold privately. The Reception area was retained jointly owned and was leased until 2007 to the Lions Club with services from the Town Hall.
In 1995 the Court House and associated rooms were leased to the Buninyong & District Historical Society.

The Town Hall is now managed by a Town Hall Special Committee appointed by the City of Ballarat.

The Hall and adjoining rooms on the west are available for hire for special events and are regularly used by community groups such as the Senior Citizens who have their own small private room and store in the annexe adjoining the kitchen. The hall is also a popular venue for private functions.

Open: 9.30am - 1.30pm, 3rd Saturday of the month (and occasionally on Village Market Days) in the former Courthouse (next to the Town Hall)

The Courthouse holds the records of the Buninyong & District Historical Society with many historic photographs, maps and records documenting Buninyong's story to the present day.
It is well worth a visit and members of the Historical Society are on hand to answer your queries.

Visit the Society's website for more information about Buninyong's history including downloadable copies of the Society's excellent newsletter.