A large open area is used for Playgroups and exercise classes. 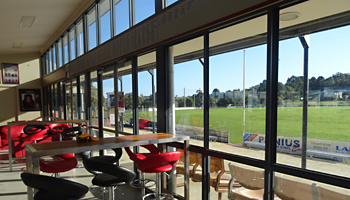 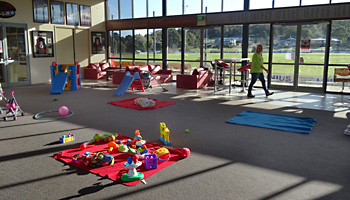 The facilities, with meeting rooms, kitchen and bar are available for hire. Contact: Kate Gordon 0431 172 551.

Brief History of the Buninyong Community Facility and Reserve

1857: Buninyong's original Recreation Reserve was gazetted, in the area now occupied by the Golf Course. It included a racecourse, rifle range, football and cricket ground.

1928: The last recorded race meeting was held. Part of the old grandstand was moved to White Flat Oval in Ballarat.

1930-1970: Football and cricket were played at Royal Park; tennis on various church courts; netball at the Buninyong Primary School. A new combined Recreation Reserve on land adjacent to the former railway station was proposed and supported by the Shire Council and sporting community.

1986: The former Buninyong Shire Council, with lobbying from the Leisure Centre Committee, received State Government funding to acquire private land plus an adjoining 5 acres of Crown Land for a future Oval and Leisure Centre.

1988: The Buninyong Shire Council received further government assistance to build a Soccer Oval to the north of the tennis courts and commence drainage works and the construction of an oval.

1989: The project was deferred due to construction difficulties and lack of money.

1997-2004: The Buninyong Football Netball Club kept the project alive by running successful raffles and continuing to push for improved Oval and facilities

2004: Lobbying for funding succeeded and work recommenced to complete the new oval and Community Facility.