The Buninyong and District Community Newsletter marked its 35th Birthday with its first digital edition in July 2012.

Newsletter committee members collating the last copy of the print-only version of the Buninyong News, in the Old Library, July 2012 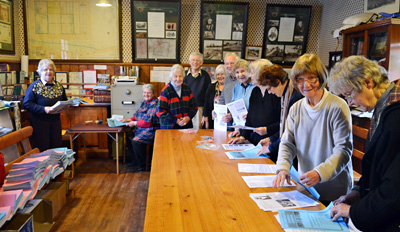 Over its span of 35 years, it produced many memorable issues documenting local events and aspects of the lives of local people. Even the flow of advertisements makes a fascinating record of the coming and goings of Buninyong's small businesses over the years: some remain, such as the Buninyong Supermarket which has just moved to much-enlarged premises, others have been replaced by new ventures. Remember Michael Whiteside's Old tin Shed, Joyce Nicholls' junk shop, the Buninyong Saddlery and the Old Library Pottery?

Whilst not everyone welcomed the shift to online publishing, rising costs forced the move and the News hoped that its regular contributors would continue to support it and its many loyal readers would adapt to the change.  At least the hard-working teams who walked the streets of Buninyong rain, hail or shine to deliver the News each month might have been glad to be relieved of their task!
Organisations such as Buninet offered to print a few copies each month for Senior Citizens who did not have access to a computer (or who didn't want to use one) and other organisations did the same for some of their members. The Buninyong Information Centre also undertook to print a copy each month for anyone to browse in the Old Library's Reading Room.

It was a big step, but The News team hoped it represented a new beginning, not the end.

Editor Ann Gooding with both versions of the News; the team of collators celebrating the News' 35th birthday. 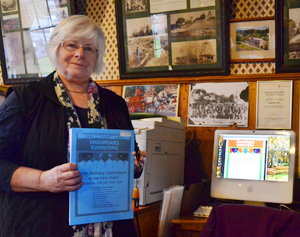 Note: The December 2014 edition was the last by the long-standing editors, Ann Gooding and Karen Hulston. From 2015 the Buninyong News was co-ordinated by the Buninyong & District Community Association. Buninyong fondly farewelled Ann and Karen and thanked them and their team for keeping their loyal readers informed about Buninyong happenings over the last 37 years!

Note: Printed copies of the 2012-2014 Buni News are available to read at the Buninyong Information Centre in the Old Library, 408 Warrenheip St, for those who do not have ready access to a computer.