De Soza Park runs along Union Jack Creek in the centre of Buninyong, from Warrenheip Street to Winter Street, with walking tracks on both sides of the creek. Near the Warrenheip Street entrance there is a playground, a toilet block at the rear of the rotunda, a barbecue and picnic tables. A stage is regularly used for special events.

Although De Soza Park was not opened until 1983, it includes several points of historic interest. The eastern end includes the Old Buninyong Burial Ground running south to Learmonth Street and the mullock heap remains of the Old Crown Mine, whose site was marked by a poppet head until 20013. The park extends west as far as the area formerly known as the "Tannery Swamp", where a huge tannery operated from the 1860s to the 1920's. (Several beautifully crafted boots from the tannery are on display in the Buninyong Visitor Information Centre.) Last but not least, the park was named after Buninyong's legendary "Gold King", Henry Joseph Desoza, even though the spelling is slightly different.

Early surveys show a Miners Dam on the western extremity of the De Soza Park area. This dam would have been created by deepening and widening the meandering course of the Union Jack Creek. The dam wall was constructed on the west side and formed a rough semi circle running from the high rising ground on the north side of Learmonth Street (approximately opposite the present Golf Club entrance) to the high ground at the southern extremity of Lumeah Road. During the laying of the sewerage system in 1986 the excavator dug up the old sluice valve. This was located some 8 metres in from the highway along the gravel track leading to the pumping station. The valve was entrenched in silt at a depth of about 1.5 metres.

The overflow fed into a canal which supplied the miners living and working south of Buninyong. The trench is still visible at the foot of McNaughtons' paddock. At this time the dam was still known as The Miners Dam.

The original Tannery Dam was at the foot of Cathcart Street South, immediately below the east end of the Tannery. (The tannery was started in the 1850s by A. C. Davies a saddler who then worked in partnership with the Graham Brothers who later acquired the works.)

With the decline of mining the dam became known as the Tannery Dam. As the years went by the dam silted up and eventually broke its wall, reputedly in the area near the sluice valve. To prevent flooding of the road, the Union Jack Creek was then diverted by the construction of the present tree lined bund and the flow directed to its existing course. According to George King, a local resident now deceased who lived on the north bank adjacent to the dam, this occurred in the 1920s. Other residents, George Eason and Charlie Coxall, can recollect coming with horse carts to collect the lime from the tannin pits. Their route was along a track to the west of the existing freehold land then along the rear of the factory. The round brick tannin pits were demolished when the land adjacent to Cathcart Street was levelled for housing development in the late 1980s.

In an attempt to prevent further expansion of the swamp area a small concrete dam was built across the creek just above the point where the Tannery Dam (Cathcart Street) channel joins the Union Jack Creek. Despite its intentions, this dam aggravated the silting problems and was removed in the late 1980s restoration project.

The area near Warrenheip Street contains the mullock heap remains and the shaft of the Old Crown Mine. The air vent is in the gardens of the Old Library and this was capped in the period of the Library restoration in 1991.

Information on the history of Desoza Park was supplied by Derick Leather, Buninyong & District Historical Society. 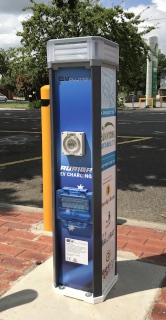 Free EV charging is now available at the two-vehicle EV station in Warrenheip St, in front of DeSoza Park, next to the Information Centre, opposite BP garage. The charger also has a 1.5 amp power point for charging electric bikes and scooters.