The Lal Lal blast furnace ruins rate as one of the most important and highly significant sites of early industrial history in Australia. The blast furnace is the only one from the nineteenth century remaining in the Southern Hemisphere and it represents the only attempt to smelt iron ore in Victoria. It has an ‘A’ classification from the National Trust.

The Lal Lal Iron Mining Company was formed in 1874. It set up an iron ore quarry and smelting works, which at its peak employed 160 men. Charcoal from local timber, brown coal from the area and Ballarat coke were all used as fuel for the smelting process. The mine reached its peak in 1884 when 1,600 tons of ore were smelted and 800 tons of pig iron were produced, however production rapidly declined after a few years.

The Lal Lal blast furnace and iron mine are on Iron Mine Rd, at Lal Lal, near the spillway of the Bungal Dam. The ruins of the 17-metre-high furnace and the adjacent iron mine are clearly visible in the bush and information boards explain the operations of this amazing relic of early Victorian industry. 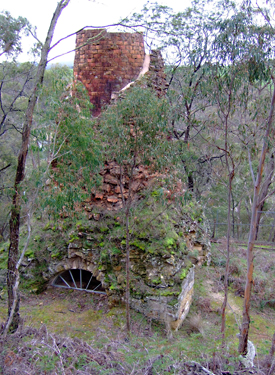 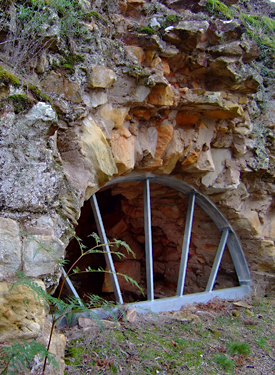 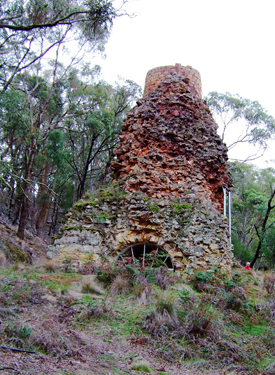 Information on the history of Old Stone Court House was supplied by by Beth Ritchie and Derick Leather, Buninyong & District Historical Society.

Buninyong's Old Burial Ground is a narrow strip of land running between Learmonth St and the Union Jack Creek, near Cathcart St. Early settlers from the 1840's and one aboriginal person are known to be buried here but unfortunately their graves are not marked and their precise locations are no longer known. A Bunya Bunya pine was planted by the CWA in 1988 with a commemorative plaque to mark the approximate position of Buninyong's first graves. The historic burying ground was abandoned in the 1850's when the current cemetery was established further west on the outskirts of the town.

The Buninyong Cemetery lies in well-tended grounds west of the township with distant views of Mount Buninyong. The graves of many of Buninyong's founders can be found in this tranquil setting and and it is still used today.

A complete set of the Cemetery's burial records can be searched in the Buninyong Information Centre.

The Buninyong Cemetery is managed by a Board of Trustees which has is responsible for operating, maintaining and developing the cemetery and for setting rules and policies for its use. All enquiries about burials in the Cemetery should be directed to the Cemetery Trust.

The Learmonths first settled in the Buninyong District in 1838 and there were a number of burials in the Old Burial Ground in Learmonth Street.

A preliminary survey of the Township of Buninyong by Surveyor Smythe in 1849 shows the present cemetery on the map divided into four denominational sections. It is therefore possible that the Cemetery began to be used in 1850 although it was only officially recorded in 1856. The earliest recorded burial with a headstone is Presbyterian 411: Margaret Gullan, aged 45, who died 3 December 1852. The numbering of the plots has been changed since the first survey and all the earliest burials are on the central high ground away from the creek.

In Buninyong's prosperous gold mining days there was a large local population of approximately 10,000 and there were many deaths due to unhygienic conditions, women dying in childbirth and men being killed in mining accidents or from miners disease. Burials were averaging more than 100 a year and a full-time Sexton was employed. A report in the Buninyong Telegraph, 22 October 1872 gives great praise to the Sexton of the time, a Mr Bull:

There were well-maintained flower beds, shrubs and trees along the main East-West Drive, the banks of the creek having been alternately planted with willows and elms.

Gold mining began to decline and by the beginning of the First World War the last deep lead mines had closed and Buninyong's population continued to dwindle and so, in 1968 the last permanent Sexton retired. His role has been taken over by the Cemetery Trust Secretary and the gravedigger.

With income continuing to fall, the cemetery became overgrown and neglected until in 1991 the Cemetery Trust Secretary, Alan Bath, approached the Buninyong Shire Council seeking their assistance to restore the cemetery. A Shire Councillor was appointed to the Cemetery Trust and the Shire drew up a comprehensive Capital and Maintenance Works program covering mowing, the control of noxious weeds, the identification and assessment of existing trees and shrubs, the construction of new roads, a dam and reforming the creek bed. As a result of the Shire's efforts, various unemployment schemes and volunteer assistance from a group known as "Dad's Army", the Cemetery is now in a presentable condition.

Information on the history of the Buninyong Cemetery was supplied by Derick Leather, Buninyong & District Historical Society. 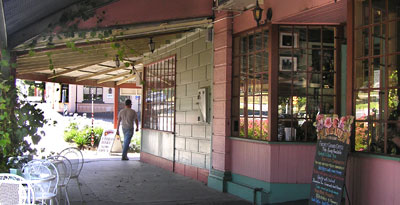 The Wathaurrung people gave Buninyong its name and its history has been written in several places.

The Keyeet balug clan of the Wada Wurrung (or Wathaurong) tribe first occupied the Mount Buninyong area and an aboriginal burial site was located in the 1860s. More recently, stone tools have been found but a full archaeological survey has not yet been conducted.
The first recorded ascent of its summit by European colonisers in 1837 led to the first squatting runs being taken up in the district in 1838, and then to the establishment of the township of Buninyong in 1841.

Mount Innes (formerly known as Hastie's Hill) and the nearby Hastie's Spring commemorate the work of Rev Thomas Hastie, the first Presbyterian minister in the region in 1847 who opened the first inland boarding school there soon after. Today, Hastie's Hill has several interesting examples of original drystone rock walls.

In the township itself, an early Burial Ground was established in the 1840s then replaced by the current cemetery in the 1850's.
In August 1851 the small village of Buninyong was transformed by the announcement of gold found by the local blacksmith, Thomas Hiscock. The site of this momentous discovery is marked today by a plaque in Hiscock's Gully Road. Buninyong became the early centre of the goldfields administration and embarked on an era of growth.
Buninyong's Botanic Gardens (pictured above) were laid out in the 1870's and the mature plantings with the rotunda built in 1901 to commemorate the reign of Queen Victoria, create a picturesque oasis today.

The Falls and Blast Furnace at Lal Lal are both of exceptional historic interest. The blast furnace represents the only attempt to smelt iron ore in Victoria and is believed to be only example in the Southern Hemisphere remaining from the nineteenth century. It has an ‘A’ classification from the National Trust. See Lal Lal Blast Furnace for more information.

The Lal Lal Falls, situated within the traditional country of the Wathawurrung people, is one of Victoria's most significant Indigenous cultural sites, as it is one of several recorded living sites of Bundjil- the Kulin peoples' creator spirit. Lal Lal Falls (later) ... became a tourism attraction for non-Indigenous Australians for its natural and cultural values.

5 beautiful Buninyong gardens will be open to the public over the weekend.

Tickets onsale from 25 September on Trybooking

Unfortunately, no new editions of Buninyong's newsletters are being published at present. The last edition was: Buninyong & District Community News - February 2022 and you can find other recent editions at: Newsletters 2015-22

Free EV charging is now available at the two-vehicle EV station in Warrenheip St, in front of DeSoza Park, next to the Information Centre, opposite BP garage. The charger also has a 1.5 amp power point for charging electric bikes and scooters.